Green Bay, Wis. (March 18, 2014) — In the dairy industry, Tom Wall is known to most people as “The Dairy Coach” – the charismatic guy with a unique and results driven approach to coaching employees and developing dairy managers. Wall has been a featured speaker at many of the top dairy events, most recently at the Professional Dairy Producers of Wisconsin (PDPW) Business Conference. To his friends and family however, Wall is known for his strong values and commitment to the Catholic faith. It’s his faith that led him to launch a Kickstarter campaign to raise funds to produce a Catholic prayer book that will help children learn and develop prayer habits in a fun and interactive way.

The goal is to raise $18,000 for production and printing of the book entitled “Aquinas Kids: A Collection of Catholic Prayers” – all before Easter.

Wall has partnered with Marty Whitmore, a professional designer who will create modern illustrations that have the same eye catching appeal as many children’s programs found on television and in movies. 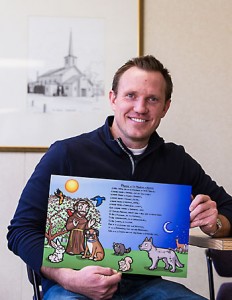 Tom Wall with an illustration of St. Francis of Assisi and the Prayer of St. Francis. He made the poster as a Christmas gift for his niece and nephews and now plans to create a Catholic children’s book of prayers. Photo credit: Sam Lucero, The Compass

“Aquinas Kids” developed into Wall’s Lenten project when his father faced life-threatening and unexpected health complications following routine heart surgery. After three weeks of constant prayer, expert medical care and the support of his family, Wall’s father was on the road to recovery. Even though he has always been a faithful Catholic, this difficult experience renewed Wall’s faith and motivated him to share the gift of prayer with others – specifically his niece and nephews.

“At the hospital my family prayed the rosary, and hearing the sound of my niece’s and nephews’ voices reminded me of how important prayer was in my own faith development as a child,” said Wall. “Now I want to help them and other children learn how to pray.”

The funds raised from this campaign will make this vision a reality, he added. The book will feature traditional Catholic prayers, a simplified explanation of the rosary, the seven sacraments, the Stations of the Cross and aspects of the Mass.

With only a few short weeks to go, Wall’s Kickstarter campaign has nearly 20 backers and has already raised over $4,000. Support levels are named after recognizable Catholic figures: priest, bishop, cardinal, pope and three religious orders.

For more details on “Aquinas Kids: a Collection of Catholic Prayers” visit and support the Kickstarter campaign before Easter.

About the author: Tom Wall lives in Denmark, Wisconsin and is a graduate of the University of St. Thomas located in St. Paul, MN. Wall owns and operates Dairy Coach, LLC a coaching, training and consulting venture focused on the Dairy Industry. Known as “The Dairy Coach”, Wall speaks to national and international audiences about the importance of training and team building.

Tom Wall has been called a lot of things, but he prefers The Dairy Coach™. He's passionate about helping people reach their potential and cringes every time he hears someone say "it's all about the cows". Based out of Green Bay, Tom trains employees and helps dairy managers implement simple systems that work.

Work With Tom Develop Your Team

Read more from Tom at:

Get started with our
free PDF resources!

Create Your Foundation Your People Strategy One A Day Manager Checklist